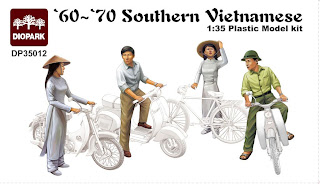 As you can see they are designed for Diopark's own scooter kits, but I'm pretty sure I can find another use for them.  I've been looking for newly sculpted Asian figures for a while now, so these are a blessing.  The Bronco Chinese PLA girls marching are nicely moulded but they don't look right... their heads are rather small and not particularly Asian.

This set of Vietnamese boys and girls are on the way from Hobby Search based in Japan, and cost me the princely sum of £12.75, including postage.  If they were to be on sale here, I can imagine them being a wee bit more than that, once the 20% VAT and import duty have been added, as well as the shop's mark-up.

The female figures have identical bodies but come with optional heads and arms, allowing me to have spares, while the lads have separate lower bodies and optional sun hats.  The girls' aodai costumes come with a separate back flap, so may be possible to produce one of them at least wearing a long apron, but I'm considering using them as they are and placing a small Japanese car with them in a Saigon/Hanoi setting outwith the Vietnam war... the clothing on the figures is pretty timeless to be honest.

Photos of the actual figures when they arrive ^_^