Well, I arrived in Japan yesterday (30th October) on an Air France flight... and it was a relief to finally get here.  The day had been a nightmare - travelling to Glasgow Airport at 3am in the pouring rain in a taxi was not fun.  My plane to Paris (which went vie Cardiff in Wales) was half an hour late in leaving.  At Glasgow the Fly Be counter-assistant couldn't give me a boarding card for my Air France flight, so I had the worries of that hanging over me.
Arriving in Cardiff 10minutes behind schedule and it took me forever to find the Terminal 2E Air France desk for my flight... only to be told that there was a Cabin Crew strike and the flights were disrupted.  I was given a stand-by ticket.  My day was getting worse and worse!
Frustrated and in France I hunted for help and someone who could tell me what to do.  Some people were helpful, some were downright rude!  Yes, Air France counter clerk at the Terminal 2E gates 51-69.  In the end a very nice man (a supervisor I think) got me a boarding card and told me to get on the plane.  I thanked him, and with my stress-levels going through the roof ran like a frightened rabbit!  (See... fat guys CAN run when we have to!)
Thanks to the cabin crew strike the plane (Airbus A380 Super Jumbo) was an hour late in taking off.  I think maybe 75% of the passengers had been given standby tickets and it took forever to load us all on.  the young Japanese man sitting next to me only found out he was allowed on 5 minutes before he boarded.
This is a shocking thing to happen... airlines should NOT be at the mercy of their crews, and the passengers MUST NOT suffer as a result.

The plane was comfortable enough with plenty of leg room, but the cabin crew (well, some of them) were less than friendly.  This strike also had an effect on the meals served.  There were no choices: we all got cold dinners of chicken and pasta, some kind of veg and petite pan.  No Japanese food at all.  Breakfast appeared to be a cup noodle... woo-hoo!
I will never fly with Air France again!

well, I am here anyway, so during my three week holiday I can keep an eye out for Showa buildings, cars and other items of interest.

The blog will be on hold for a little while.  I am going to Japan on holiday for three weeks at the end of October so modelling is on hold.

If I see any old Japanese cars I will post photos of them, likewise any other Showa era items of interest and could be of use in dioramas with cars and people.

Mine hasn't arrived yet, but I'm happy to have got one.

The Viva HA was a small family saloon which was once very common on the streets of Britian, but in this form it lasted until 1967, when it was replaced by the more curvy HB.
The Viva van lasted until the late 70s and there were literally thousands of them running around until the late 80s.  They were, however, prone to rust and are a very rare site these days.

The model I bought was destined to be gutted and turned into a slot car, so I have rescued it from such a horrible and cruel fate, and it will now have a place in my collection the way Airfix intended!

This is what a Viva actually looked like... boring isn't it?

And the much more common van version:

Back to Japanese cars next time.  でわまた！
Posted by IainM at 12:56 No comments:

While I dither about getting the Mazda R360 finished before the end of the year (ha-ha) I thought I would review the Subaru 360 which Arii have produced.

The one I have is the police patrol car version, as seen here: 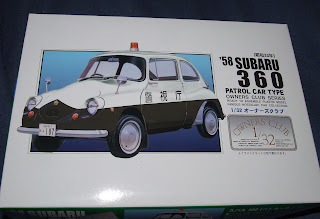 The actual kit is identical to the normal 360, apart from the addition of a red light, a different decal sheet and additions to the instructions.

On opening the box you have the main body, the other parts on a single fret and the windows as a single unit (plus the lights of course).  The red lamp, tyres and decals are stored in a separate bag.
The main fret has some signs of flash, and the windows have the usual less-than-perfect ripples and bumps.  But the bodyshell is a bit of a mess.  At the rear are very obvious mould separation lines, with the right side being particularly bad, with a huge web of flash.  The window openings also have plenty of flash, which takes a lot of cleaning up.

One thing I should point out from the start: this isn't a 1958 version.
The earliest versions of the 360 featured horizontal slots in the engine cover, horizontal rear lights and a raised petrol cap cover.  It also had a single intake grille on the left rear section behind the side window. 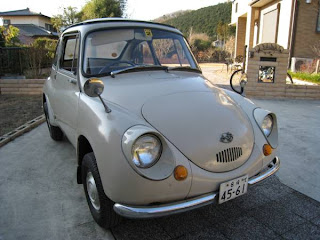 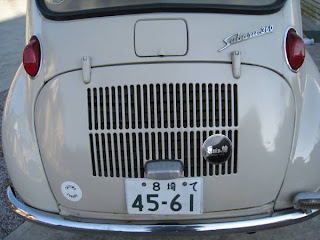 http://ninjagarage.blogspot.com/search/label/SUBARU
The Arii kit is really a later version, as you can see from this photo of the rear of mine: 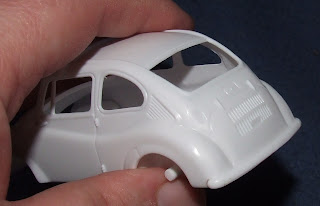 Thanks to the internet, and sites such as Ninja Garage there is a mass of photo material out there for reference, making it relatively easy to date a version of the car in hand.  So I would say this one is more like a 1967 version than a 1958 model.

The model, as with around half of the ones I have bought so far, was originally designed for a clockwork motor, as the chassis so clearly shows: 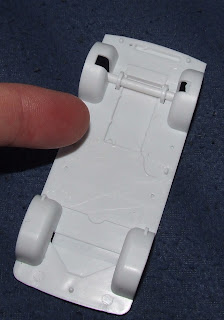 As a result it sits too low to the ground and will need to have the chassis altered to allow for the correct ride height, which as you can see is considerable. 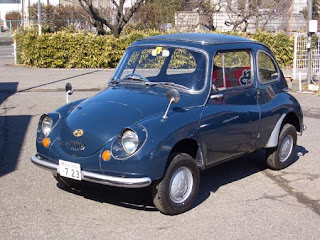 http://ninjagarage.blogspot.com/search/label/SUBARU
The rest of the model is to the usual high standard and will build into a lovely model once properly modified and carefully finished.

While researching the car I came across a 1958 copy of the British magazine "The Autocar" which has a 2-page article on the brand new Subaru 360.  It's not quite Top Gear, but, well, it was the 50s! 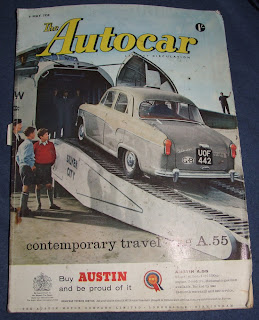 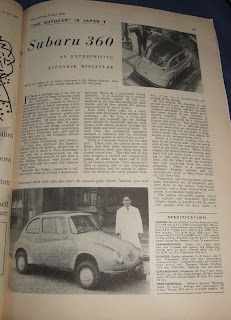 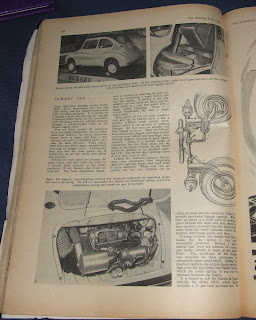 *    *    *    *    *    *    *    *    *    *    *    *    *
As a footnote to this entry I would like to express my sadness that so many lovely little 1/32 car kits have ended up as slot cars.  I find this particularly annoying with regard to the Airfix cars of the 60s.  I have seen so many of them on eBay with slot car chassis that it breaks my heart.  I would love to build the Sunbeam Rapier, Ford Cortina and Ford Zodiac... even the Morris Mini, but all you see are metal chassis and ungainly wheels.
Rare and desirable models have only the bodywork retained and the rest consigned to the junk pile.  They deserve to be built as models, treated with care and admired, not gutted and whizzing around a track.
Rant over.
Posted by IainM at 16:07 No comments: